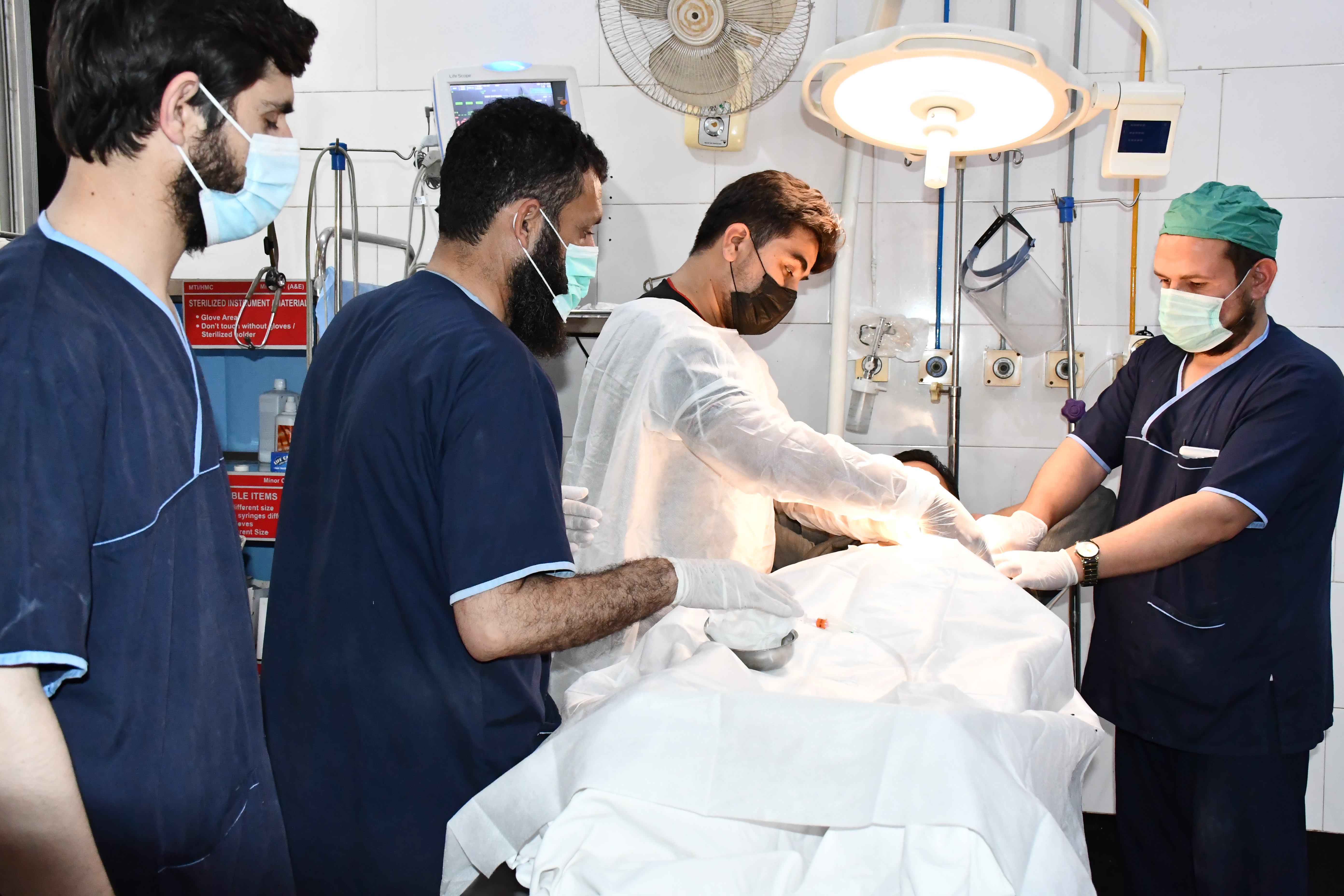 1.5 million Patients including 30 thousand Afghan citizens receive medical treatment from HMC Peshawar during 2022 The annual report of Medical Teaching Institution Hayatabad Medical Complex (MTI-HMC) Peshawar has been released, according to the report, 1350000 patients in MTI-HMC, 3 lakh 90 thousand in Institute of Kidney Disease (IKD) and 60 thousand patients in Burn and Plastic Surgery center received medical treatment in 2022. More than 800,000 patients were brought to HMC's accident and emergency department, while 30,000 Afghans benefited from the health facilities at the hospital. According to the administration, 550,000 people received OPD while 40,000 people received treatment through Sehat Sahulat Program, on which more than one billion 280 million were spent. Report revealed that 102507 patients were admitted in HMC Peshawar for provision of the various medical facilities while more than 50 thousand surgeries were performed, including more than 20 thousand major surgeries. According to the report 30 percent of patients were referred to HMC from other hospitals of the province, including the private hospitals of Peshawar for better treatment. Apart from the Sehat Sahulat program, the hospital provided free medicines worth 400 million rupees during the year 2022. Moreover, for the convenience of the patients, the hospital administration established pharmacies within the operation theaters so that the medicines used during the surgery can be provided to the patient on the spot. In 2022, as in previous years, diagnostic services continued uninterruptedly in the Radiology and Pathology Departments of the hospital and 9574 MRIs, 19731 CT scans, 165965 different X-rays, 113314 ultrasounds and 2017962 different tests were performed, while 300 Afghan patients benefited from free radiology and pathology services. It may be noted that HMC is the only public sector hospital in the province to provide diagnostic facilities through 1.5 Tesla MRI machines and in 2022 advanced CT scan and 3D mammogram were installed to further improve diagnosis. Providing cardiology services during 2022 some 400 open heart surgeries, 4428 angiography and 2086 angioplasty performed while the facility of heart link was introduced in CRC through which the treatment facility is being provided to patients through video link in Chitral. Furthermore, 5 cath labs and modular operation theaters provided facilities to cardiac patients throughout the year. Institute of Kidney Diseases (IKD) being a specialized hospital for kidney diseases, facilitated 390,000 patients including 27,552 dialysis procedures. Similarly, 60000 patients were treated in the Burn and Plastic Surgery Unit, of which 20000 received burns treatment and 60000 underwent plastic surgery services. A Complaint Management Service has been launched for redressal of complaints regarding Sehat Sahulat Programme, received 1300 complaints during the year which were resolved within 24 hours. In the year 2022 a Patient Facilitation Center was also established to provide one window facility to the patients admitted for different treatment. HMC continued its journey of rapid success and the hospital got approval from College of Physicians and Surgeons Pakistan (CPSC) to start post graduate training in Neurology, Pulmonology, Cardiology and Spine as sub-specialties. Furthermore, 234 doctors completed FCPS training in 2022. In order to continue providing best medical services to the people of Khyber Pakhtunkhwa province, for the first time in the province HMC is going to establish a specialized unit for stroke patients, apart from establishing a special accident and emergency department and an orthopedic center within the premises in 2023. Moreover, several other projects are under implementation which will ensure the provision of all medical facilities to the people of Khyber Pakhtunkhwa within the province.

SHORTLISTED CANDIDATES FOR SCREENING TEST OF JCT PHARMACY (CONTRACT) WILL BE HELD ON 07-FEB-2023, TUESDAY (09:00 AM) AT AUDITORIUM OF KHYBER GIRLS MEDICAL COLLEGE

SHORTLISTED CANDIDATES FOR SCREENING TEST OF CHARGE NURSE FEMALE(CONTRACT) WILL BE HELD ON 07-FEB-2023, TUESDAY (09:00 AM) AT AUDITORIUM OF KHYBER GIRLS MEDICAL COLLEGE

SHORTLISTED CANDIDATES FOR SCREENING TEST OF CHARGE NURSE FEMALE(CONTRACT) WILL BE HELD ON 07-FEB-2023, TUESDAY (09:00 AM) AT AUDITORIUM OF KHYBER GIRLS MEDICAL COLLEGE